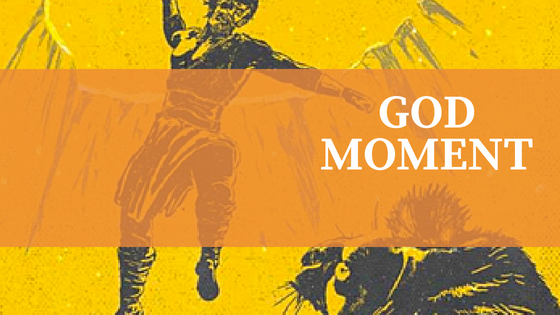 In 2 Samuel 23:20 it states 20Benaiah was the son of Jehoiada, the son of a valiant man from Kabzeel, who had done many deeds. He had killed two lion-like heroes of Moab. He also had gone down and killed a lion in the midst of a pit on a snowy day.

Take a brief pause after each phrase as you read it to get the full picture: “He also went down…and killed a lion…in the middle of a pit…on a snowy day.”

With each phrase, the seemingly impossible gets even more impossible. This man deliberately jumped down into a pit with a lion that had accidentally fallen in.  This was his moment to do something that has never been done.

Some of you are looking for your next promotion, raise, your next God Moment, God is letting you know that it will come as a problem for you to solve.

God was a problem solver – the children of Israel had a problem with slavery and God solved that problem by dealing with Pharoah.

Jesus was a problem solver – we had a problem with sin and Jesus came and solved that problem for us.

Martin Luther King Jr. was a problem solver – we had a problem with segregation and he helped to solve that problem

Peter was a problems solver – there was a lame man at the gate called beautiful and Peter solved his problem by healing Him.

Everything that has been created was created to solve problems and you dear brothers and sisters are a problem solver. Our God moments, those moments that will propel us to the next chapter of our life will come in a way we didn’t see coming.

Benaiah didn’t plan on defeating a lion but he understood this was an opportunity he couldn’t pass up. There is something coming in the future you won’t see coming but it is something you are equipped to handle. I will be praying for your God moment that you don’t miss it because God is not through with you. Even though the lion had every advantage, it lost. Even though it seems the odds are against you, just know you will win.